Full Name
Osvaldo Garcia
Company
Cadwalader, Wickersham & Taft LLP
Speaker Bio
Osvaldo Garcia is a member of the firm's Private Client Group with a focus on
international and domestic estate planning, estate administration, trust
administration, tax controversies and matters of international regulatory compliance.
Osvaldo was selected among of a pool of global contenders to the “Ones to Watch”
list issued by the Private Client Global Elite for years 2017 and 2018.
Osvaldo concentrates his pro bono practice on immigration law, including Special
Immigrant Juvenile Status proceedings, asylum applications and Violence Against
Women Act petitions. He is the founder of the firm's Cadwalader Black and Latino
Association Immigration Clinic, an internal support network for Cadwalader
attorneys handling immigration matters, and currently serves as the Director for the
Clinic. For his pro bono efforts, Osvaldo was awarded the distinction of Pro Bono
Attorney of the Year by the Hispanic National Bar Association in 2016. He was also
awarded the New York State Bar Association's President's Pro Bono Service Award
for 2016 and has been recognized by The Cadwalader Center for Community
Service with the Pro Bono Certificate of Excellence from 2015 to 2018. He was also
recognized by the firm as the winner of the Build Community Award due to his pro
bono efforts in the New York City immigrant community.
Osvaldo received his J.D. from Cornell Law School, with a concentration on
Litigation and Advocacy, a specialization in International Legal Affairs and with
Dean’s List distinctions. He received his B.A. from Florida International University,
magna cum laude, where he concentrated on International Relations and Criminal
Justice and was awarded with the Outstanding Academic Achievement in
International Relations. Osvaldo is currently attending New York University School
of Law as part of its Executive Tax LLM program, where he expects to graduate in
2019. He is fluent in Spanish and conversational in Portuguese. Osvaldo is admitted
to practice in the State of New York.
Speaking At
End of the Innocence: Behind bars: The criminalisation of the profession and erosion of the attorney- client privilege 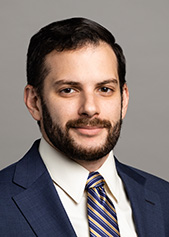