Full Name
Hon. Tanya R. Kennedy
Job Title
Supreme Court Justice
Company
State of New York
Speaker Bio
The Honorable Tanya R. Kennedy is a Supreme Court Justice and former Supervising Judge of Civil Court, New York County. Upon her election to Civil Court in 2005, Justice Kennedy has presided in the Criminal and Civil Courts of the City of New York, as well as the Family and Supreme Courts of the State of New York. Since 2006, she has taught a juvenile justice seminar course as an Adjunct Professor at Fordham University School of Law.

Prior to joining the judiciary, Justice Kennedy served as Principal Law Clerk to former Associate Justice Barry A. Cozier in the Appellate Division, Second Judicial Department. She also served as Principal Law Clerk to Justice Cozier in the Commercial Division of the Supreme Court of the State of New York, New York County. Justice Kennedy commenced her legal career at the New York City Law Department, Office of the Corporation Counsel, where she worked in both the Bronx Family Court and Bronx Tort Divisions and was promoted to Deputy Assistant Chief while assigned to the Tort Division.

Justice Kennedy received her law degree from Benjamin N. Cardozo School of Law in 1992.
Speaking At
Women Who Lead in Technology: Balancing Always On and How To Turn It Off 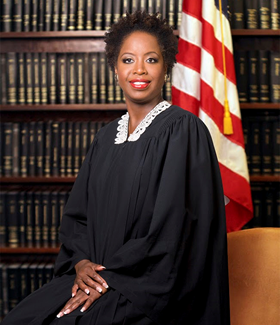