Gaynor Wood joined CLS in November 2013 as Head of London Legal and became General Counsel in January 2017, based in London. As General Counsel, Gaynor is responsible for overseeing and leading the Legal division globally, identifying and managing legal issues and providing advice on all aspects of the legal framework and the laws and regulations affecting the CLS Group. Gaynor was Called to the Bar of England and Wales in 1994. Following completion of Pupillage in a commercial regulatory practice, she commenced her career at J.P.Morgan. Since then Gaynor has held positions within the legal departments of a number of major investment banks in London, including Deutsche Bank and BNP Paribas. Prior to joining CLS, Gaynor was a Director and Associate General Counsel at Bank of America Merrill Lynch in London, with primary responsibility for legal support of the rates and FX business lines. Gaynor is a Master of the Bench at Gray's Inn and is a member of the Bar Association for Commerce, Finance & Industry (BACFI) and the Bank of England JSC Legal Sub-Committee. Gaynor was also closely involved in the development of the FX Global Code. 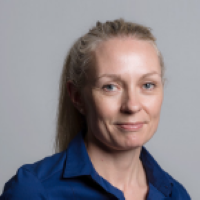