Full Name
Ayele Locoh-Donou
Job Title
General Counsel Africa
Company
GE Healthcare
Speaker Bio
Ayele Locoh-Donou is presently the General Counsel for GE Healthcare Africa, based in Abidjan, Cote
d’Ivoire where she is responsible for leading a legal team across the continent and providing legal support to the Healthcare business in all its dimensions: commercial contracting, project development & structuring, litigation, distribution etc... Prior to this role, she advised private companies investing
or developing projects in Africa.

From 2003 to 2007, Ayele served as Special Advisor to the Executive Director representing Africa at
the Board of Directors of the World Bank. She began her career at Cleary, Gottlieb, Steen & Hamilton doing mostly capital markets transactions and mergers and acquisitions based in Paris.

She subsequently became General Counsel of Liberty Surf France (later Tiscali Group), one of Europe’s first free internet access provider. In this capacity, Ayele was responsible for executing an aggressive acquisition strategy for the company; She then led a Task Force to integrate all acquired businesses across Europe based in Milan.
Ayele has been admitted to the Paris, New York and Togo bars. She holds a Master’s in International Business Law from the University of Paris Pantheon Sorbonne and an LLM from Georgetown University Law Center. She speaks five languages fluently and is a certified yoga teacher.
Speaking At
Women in Power in Legal: Becoming A Leader Within Your Organization 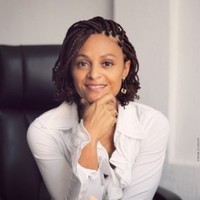