She holds an LLB Degree, a Postgraduate Diploma in Cyber Law and a certificate in Advanced Broadcasting Law. She completed a Management Advancement Programme with WITS Business School in 2010, a Women in Leadership Programme with GIBS in 2013 and is currently in her second year of studies for her Masters in Business Administration degree. In addition, she has completed a number of other managerial and legal courses to further her knowledge and enhance her expertise.

One of her best traits is her interpersonal skills. She has a facilitating nature, has a calm demeanour and is able to bring different people together.
She has appeared as a speaker and facilitator at numerous workshops organised for the legal fraternity. She was the chairperson of the judging panel of the Women In Law Awards (WOZA) which was launched in 2019. She also formed part of the advisory panel for Corporate Counsel
South Africa.
Speaking At
Women in Power in Legal: Becoming A Leader Within Your Organization 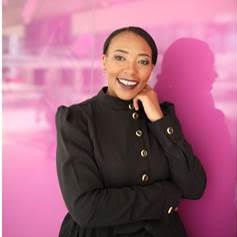